A short history of the High School and environs 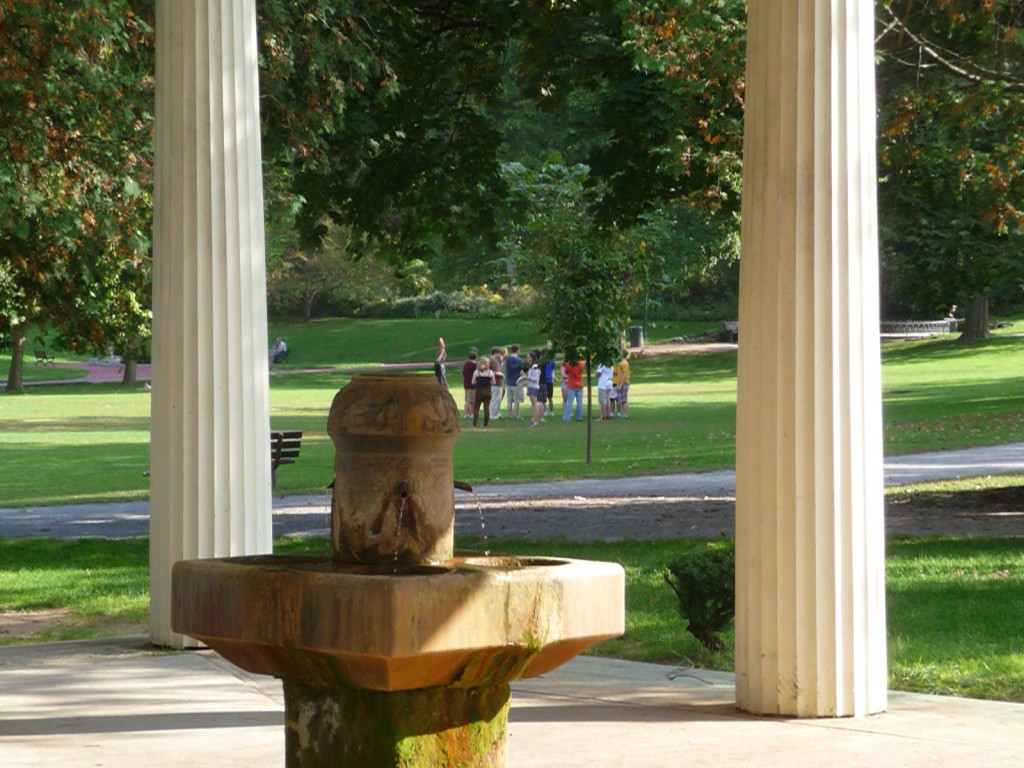 Congress Spring, one of the ost important in Saratoga Springs’ history, in Congress Park with the SSHS Ultimate Frisbee Club in the background. ELI FISHER / THE LIGHTNING ROD

“It is probably human nature to take your home town for granted and, if you are young and venturesome, or even old and venturesome, to be more interested in places where you are not than in the place where you are, but sometimes I think Saratoga Springs has more than her share of sons and daughters in whom familiarity has bred an indifference to the rich and picturesque history of their town.”

These words, of the well-known late Saratogian journalist Frank Sullivan, open the preface of a 1947 compilation of articles written by Jean McGregor entitled Chronicles of Saratoga. Yet, it seems they are truer than ever today, as the world becomes more connected and one town becomes more like the next. As the city that surrounds our high school grows, perhaps it is time for us to examine some of the history  Sullivan describes. The logical place to start is one that is truly local and with which we are all familiar: the current (third) site of the high school itself, or rather, the stories surrounding it.

The origins of Saratoga Springs as we know it today lie just over a mile to the northeast of this spot, on the hill above what is now High Rock Park. On the current site of the Olde Bryan Inn restaurant (which was built between 1825 and 1832), Dirck Schouten built a log cabin, becoming the first settler of what would become the village, later city, of Saratoga Springs. Nathaniel Bartlett Sylvester’s 1878 History of Saratoga County, New York provides a thorough narrative of the events from Schouten’s arrival to the book’s publication. According to Sylvester, Schouten’s “object in becoming a temporary resident at the wilderness was to open a trade with the Indians who congregated there every summer in great numbers” (although the site did happen to be adjacent to High Rock Spring, the first spring discovered in the area).

The man that Sylvester said was “destined to become the founder of modern Saratoga, “Gideon Putnam, first came to the Springs in 1790 with his father-in-law. His many improvements to the village are listed in the History. Congress Spring, to whose early development “the village of Saratoga Springs owes much of its present prosperity,” was discovered in 1792, according to Sylvester’s book.

In 1800, Putnam commenced construction on the Grand Union, the first major hotel in the town (and eventually the largest hotel in the world). This began the era of Saratoga Springs as a resort town, first incorporated in 1819, according to Sylvester. This hotel occupied a significant portion of the block along Broadway bounded by Congress, Washington, and Federal streets (some of which were named and built by Putnam), on which the Congress Park Centre building that houses Gap, Cold Stone Creamery, and several other stores now exists. More hotels came later.

The school system of Saratoga Springs was created in 1812, with the first school built on the “north side of Washington Street.” It was established as “a citizens’ movement,” with Putnam contributing the greatest amount to its fund, one year before the establishment of the statewide public school system. An 1879 map (published by L.H. Cramer and J.W. Mott) of the city shows a schoolhouse on the south side of West Circular Street at its intersection with Benedict Street. Sylvester lists a school, No. 5, on West Circular Street, which he describes as “a one-story wood building of one room. The primary and junior departments nominally occupy this room together; are taught by one female teacher, and have enrolled since Sept. 1, 1877, fifty-two scholars. The number of sittings is seventy-eight.” 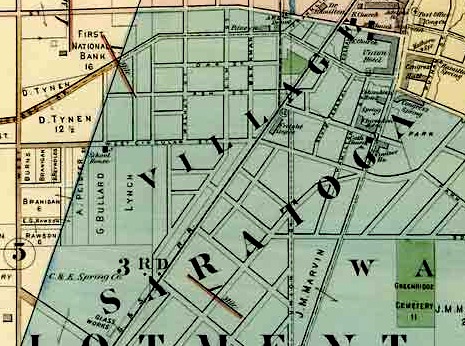 This portion of an 1879 map of Saratoga Springs shows the area surrounding the current high school site (bottom left). (Via old-maps.com)

This space is now occupied by private homes that abut the high school property to the north. This map also shows that part of the space now occupied by SSHS’s football field and track was occupied by the C&E (Congress and Empire) Spring Company. This property, which included the area along Congress Avenue known as Congressville, is also shown as the site of the Mount Pleasant Glass Works, which moved there from Greenfield and produced bottles for numerous area spring waters, according to Timothy Starr’s Lost Industries of Saratoga County.

It is difficult to discuss the history of Saratoga’s west side without considering the impact of the railroad.

“The history of the railroad dates back to 1832, when it was established along West Circular Street,” wrote Lee Signor in Dublin Revisited. Signor said that this was “the main employer for West Side settlers,” who, after the railroad was built, were mainly Irish and later Italian.

The main rail station of Saratoga Springs was located on the current site of Market Center and Criterion Cinemas. Part of the railroad grade is now the Railroad Run multi-use trail, which runs near the Joseph Street side of the high school. Circular Street, which passes north of the high school, has a curious distinction itself: it is “the only street so named and shaped in the whole United States,” according to the 2008 Saratoga Springs, New York: A Brief History (Timothy Holmes).

Holmes mentions a legend that “a man from out west once mailed a letter to Frederic Menges, owner of Menges and Curtis, giving as the only address ‘Circular Street’—no city, no state. The letter arrived without delay.”

The first public high school opened in 1867 on the site now occupied by the firehouse on Lake Avenue. An article from McGregor’s compilation describes the early days of this school in detail. It was here that the first volume of The Recorder, our current yearbook, was published in 1897. The school outgrew this building by the 1920s, and the new high school, now Lake Avenue Elementary school, opened in 1924 (according to an article on the history of that school co-written by this journalist in the December 2008 issue of its newspaper, The Leopard’s Journal).

This building was the high school for almost 42 years. It too was eventually outgrown as a high school by the 1960s, when the population of Saratoga increased dramatically. This was largely due to the construction of the Adirondack Northway, according to the Saratoga 150 website.

The original portion of the current high school was constructed in 1964-1966.

According to the Journal, “when the new High school [sic] opened in Jan. 1966, Lake Ave became a Junior High School.” This arrangement lasted until 1972, when, due to population changes, the Lake Avenue building became an elementary school and, as the plaque next to the ninth grade office shows, the new junior high school was built on the same site as the senior one. This school apparently included what is now the ninth grade office, cafeteria, D-wing, and north courtyard. Another, rather inconspicuous plaque next to the twelfth grade office commemorates the building of its wing as an addition to the Senior High School in 1974. To crown this time capsule of construction, the current lobby and auditorium areas were added in 2003 (yet another plaque, located in the lobby near the windows of the main office, notes this addition).

This brings us to the high school of present day, through whose doors a few thousand students pass each weekday for ten months of the year, maybe without considering its surroundings, how they came to be, or what will become of them. Yet, as Mr. Sullivan said, “Saratoga is like a carefree, charming, and handsome old girl who has had a perfectly fine time all her life, made lots of friends and enough enemies to keep her self-respect; still has plenty of pep and shows no inclination at all to settle down with her knitting in an old ladies’ home.” Students, and Saratoga residents in general, ought to consider what truth this holds today.