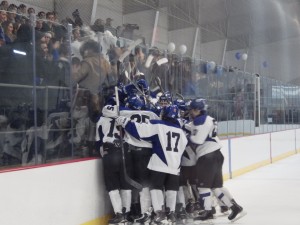 The Blue Streaks celebrate near their student section after the game.

One misstep from Shenendehowa goalie Matt Chieco led to a goal and a Saratoga win.

The Saratoga Blue Streaks defeated the Shenendehowa Plainsmen on Wednesday night at the Weibel Avenue ice rink by a score of 4-3 in a rousing, well-attended senior night rivalry game.

Defenseman Cam McCall came up with yet another huge goal in the last five minutes of the game, when a toe drag to get the puck past Shen goalie Matt Chieco got the Blue Streaks up to their 4-3 final score. Two of Saratoga’s goals came from defensemen.

“I knew I had to get it across, and I just made a simple toe drag, and put it in,” said McCall. “That was probably the biggest goal of my career.”

Shen found the back of the new first, with a goal from Tucker Marvin just a little more than five minutes into the game. At the end of a period, it was 1-0 Shen.

In the second period, senior Jack Rittenhouse put it in just a minute and sixteen seconds into the period, tying the game at one. Five minutes later, it was captain Ian Frey scoring to put the Streaks up 2-1. The Plainsmen would strike back just two minutes later, with their Peter Russo tying the game at two. In the third period, Chris Aarons of Shen gave the Plainsmen a 3-2 lead. 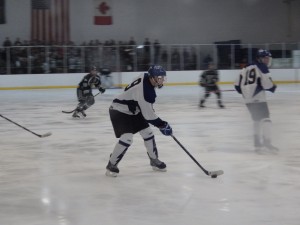 Saratoga’s Elliott Hungerford skates with the puck early in the third period. Hungerford posted one assist during the game, one of eight Blue Streaks to score or assist.

Five and a half minutes later, Zach Guzi tied the game at three with a goal of his own. McCall’s game-winner came about a minute later.

“We know how they play and they know how we play, so it’s always a battle,” Saratoga head coach Dave Torres said of the game. “We made some adjustments in the locker room and the guys came out flying.”

Saratoga goalie Danny Hobbs saved 22 of 25 shots during the game.

“I was really busy all night, didn’t really have any down moments,” said Hobbs.

With a minute left in the game, Chieco was pulled from the net, giving Shen a six to five skater advantage. As Shen kept the puck near the Saratoga net, chaos erupted in the Saratoga zone, and two timeouts were called in a short period.

“I just had to keep going, and then there was the two timeouts, and that gave me a lot of time to think, and that helped me,” Hobbs said.

It was senior night on Wednesday, and the six seniors that Saratoga honored were Max Liebers, Ian Frey, Cam McCall, Jack Rittenhouse, Tom Pelletier and Zach Guzi. Their regular season home schedule is finished, but will be back in action on Saturday, taking on La Salle at Hudson Valley Community College’s Conway Rink at 6:45 p.m.

The Plainsmen fall to 11-6 on the season, suffering their first league loss, putting them at 7-1 in the conference. Saratoga improves to 9-1 in the league, and 12-4-2 overall. Before the game, Saratoga was ranked by the New York State Sportswriters Association at #9 among New York State Division I teams, and Shenedehowa was ranked at #15. No other Section 2 teams are ranked. Section I’s Scarsdale is at the top of the rankings, being undefeated through 14 games. 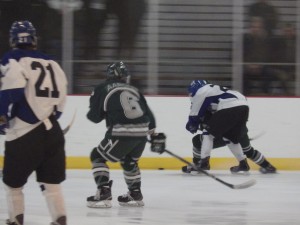 Shenendehowa’s Chris Aarons (#6) looks on as a Saratoga player races for the puck. Aarons scored one of Shen’s three goals. 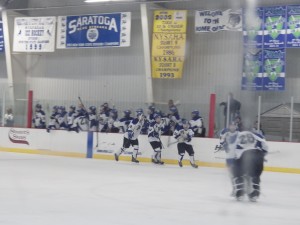 Saratoga’s Cam McCall (#16) shortly after scoring his game-winning goal in the third period. 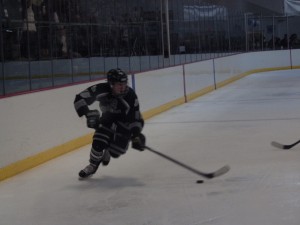 Shen forward Tucker Marvin skates with the puck during the third period. Marvin scored one of Shen’s three goals. 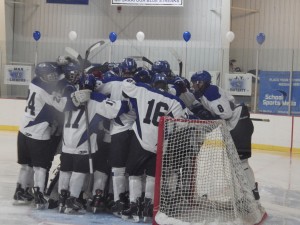 Saratoga’s huddle at the beginning of the third period, during which they would advance from a 2-2 tie to win the game 4-3. 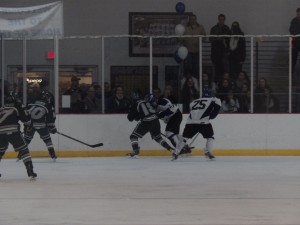 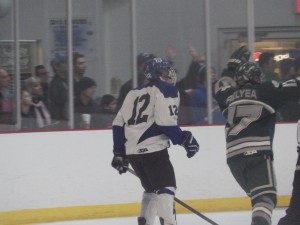 Saratoga defenseman Ian Frey during Wednesday’s game. Frey scored one of the Streaks’ four goals and was one of two defenseman to score outright during the game. 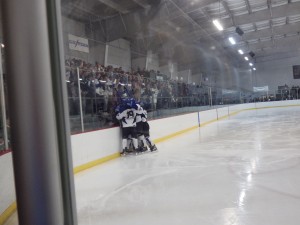 Several Blue Streaks celebrate against their student section after the team’s first goal of the night, scored by Jack Rittenhouse in the second period. 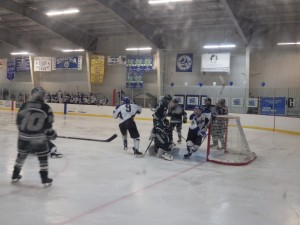 Saratoga’s Jack Rittenhouse (in white, near net) just after his second period goal tied the game at 1-1. 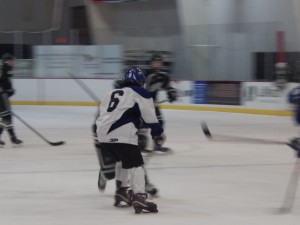 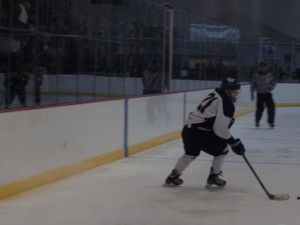 Saratoga’s Matt Russell in play during Wednesday’s game. Russell posted one assist during the game.