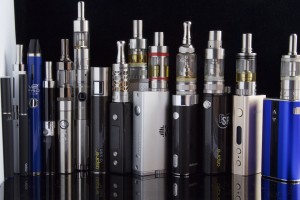 Some students here can recall a moment of instantaneous confusion in the form of walking into a bathroom to find a white puffy wisp billowing to the ceiling. Some bathrooms have a faint cotton candy scent now, which some would say is a benefit of the epidemic. The constant bickering back and forth is almost unavoidable: some believe that vaping is indeed harmless, while others tend to believe that either the jury is still out or there are undeniable health concerns that come with the habit. Either way, many have seen cars filled with vapor, instagram accounts highlighting vape “tricks” or trying to sneak a few puffs in the back of class. The question is: how extensive is the vaping practice in our high school?

A survey was conducted during a lunch as well as in a few senior classes asking basic questions about the topic. The results were not exactly surprising, however, some seemed somewhat contradictory. For instance, of the 60 students who took the survey, 47 denied vaping, or around 78% of the sample. Yet when asked how many people they knew who vape regularly, 28 said they knew more than 8 people. Meanwhile only four outright checked the “yes” box when asked if they indulge in vaping. That humber may be misleading because about half of the sample still felt as though they knew a relatively large number of students who vape regularly, with 50 out of 60 students claiming they knew at least three people that do so.

A large pillar of the anti-vaping argument is the belief that it may come with negative health effects. When asked, 55% of the students said that they do indeed think there are negative health effects. One student even wrote in the comment section of the anonymous survey that vaping causes tar to build up in the lungs. Many have strong feelings and concern for their fellow peers who do vape. This may stem from the posters that have been put up around school that indicate the certain hazards that come along with the habit. There are even signs on both bathrooms in the B-wing, upstairs and down, indicating, for instance, that scented products such as vapes can result in health issues for students who have allergies due to secondhand exposure.

Finally, a comment portion of the survey lead to many insightful quotes, of both the pro and con variety. Many of the anti-vape arguments went something like “vaping is dumb” or “vaping doesn’t make you cool”, while others seemed slightly more informed, such as those about tar build-up or simply that “there’s no need to do it in school.”

Eric Schenone, assistant principal, recently quantified the incredible spike in the fad. Schenone traced the beginnings back a year or so ago to small pen-esque e-cigs. He said that last year they may have only confiscated five of the little pens, but in September of this year, administration had confiscated five in a week. Not only that, but now they were beginning to see the big boxy looking ones, referred to as box mods. That being said, Schenone ventured that three to four students were vaping in school during school hours, more than likely in the bathrooms. He indicated that administration may only catch a few in the act per week.

While many may associate vaping mostly with the boy’s bathroom, it is being noticed more frequently in the girl’s bathrooms, which would indicate that the vaping still has yet to reach its peak popularity.

The punishment for vaping in school at Saratoga seems severe: on the first instance materials are confiscated and the offender is given in school suspension, while from the second instance onward materials are still confiscated but now the offender is given out of school suspension, according to Schenone. He attributed the sporadic pool of offenders to support at home, saying some parents will collect the vapes and smash them, others will give them right back to their kids. This could be because parents may wish to help kids to quit smoking or even because they do not care; there are not any definitively proven health effects of vaping as of yet.

Schenone struggled to find reason in the support or the practice in general.

“I just don’t know the appeal,” stated Schenone. He said there was just something unnatural about inhaling vapor, which is the same qualm many others have as well. After being asked his thoughts on the matter, Schenone said that he tried to use logic and that maybe it could be a stress reliever, yet even there he failed to see the appeal. He likened it to being taught in school about cigarettes: once you know the evils, why would anyone start?

“If you want to taste a strawberry and a banana, go out and find a strawberry and banana. At least you know that’s healthy for you,” said Schenone. He said he cannot see any benefits of vaping and he hopes vaping dies soon, as some others do as well.

Schenone also raised another issue: these things are expensive. Vapes range from a measly eight dollars to around two hundred for the high end ones, with the average box mod falling in the forty-to-sixty-dollar range. The costliest aspect though is that vaping continually hemorrhages money because the flavor juice which makes the vapor itself is constantly needing to be refilled. The price varies based on both brand and flavor, the cheapest being priced around five to seven dollars while some can be up to sixty dollars. Again, there is an impressive array of flavors such as Cosmic Fog Milk & Honey, One Hit Wonder and Unicorn Milk; the latter which is currently being sold on eBay for $56.99.

There are many unanswered questions when it comes to vaping. It has not been around long enough for there to be any long-term studies on health effects due to first or second hand vapor inhalation. Except in Suffolk County and New York City, vaping is legal to everyone in New York. Even in those areas it is only prohibited to those under twenty-one.

Will doing a first smoke trick soon become the first legal drink on one’s twenty-first birthday? Who’s to say; right now it seems like a passing fad, but vaping could become a widely accepted smoking alternative or a generation may come about entirely dedicated to perfecting the vape tornado.

Ethan Campbell is a senior covering general news for the Lightning Rod. You, too, can contribute. Come to our meetings on Mondays after school in B118 or send an email to editor@thelightningrod.net.

One Response to “In-Depth: The Vapor Rises”