By Tyler Charnik and Jared Nightingale

The Silver Warriors jumped out to an early 7-0 lead with 11:26 left in the first quarter and a 65 yard touchdown pass from quarterback Dan Brownell to receiver Richie Quinn.

“The first drive we scored but our trouble is staying consistent.” Brownell said after the game when asked what improvements could be made to the Niskayuna team. This emphasizes the breakaway touchdown in the first quarter and the inability to preserve that momentum.

The Blue Streaks offense was centered around the running game. When head coach Terry Jones was asked about the focus on the ground game, he responded with, “We’re a run first team, usually every week. When you run the ball you wear the opponent down and eat up the clock while putting points on the board.” Jones makes a great point; if the team is succeeding in the ground game, no need to change that approach if it is working efficiently.

Coach Jones also highlighted the importance of scoring early, although it was not a factor in this particular game due to Saratoga’s 56-0 run following Niskayuna’s opening drive touchdown. “We need to start the game better, we seem to get off to a slow start…We haven’t started a game real well all year.” Jones said postgame; his team must score earlier in games if they want to continue winning.

Senior running back Ashton Capone’s dominant outing impressed the fans as well as Coach Jones. “Ashton played phenomenal, he ran the ball well, did a great job of hitting the hole which is something we’ve been talking to our running backs about.” Jones praised his running back about his ability to read the defense and find the best route. Capone himself had praise for his offensive line. “It was a big success for the line, they made holes right for me to run through.” The line held up extremely well, accounting for Capone’s terrific game.

Capone also knew he had to step up in the absence of starter, Chris Klimek due to an ankle related issue. “Chris Klimek went down with an injury this week, that just told me I need to step up and fill the role.” Capone did a superb job in replacing Klimek, with six out of the team’s eight touchdowns.

Despite an impressive opening drive by Niskayuna, the Blue Streaks virtually shut down their offense for the rest of the night. The defense put constant pressure on Brownell and the Silver Warrior offense reducing his time in the pocket, making it difficult to complete passes. “Saratoga’s a physical team. Their physicality and strength got to us and they played good hard nose football,” Head Coach Brian Grastorf said after the game, relating to their lack of offense in the last three quarters. 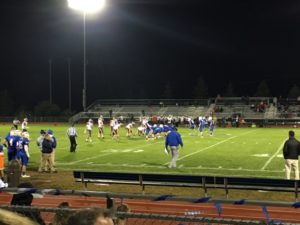 The Silver Warriors and the Blue Streaks face off before the ball comes back into play. (T. Charnik and J. Nightingale) 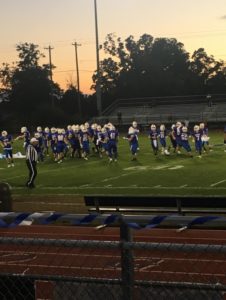 The Saratoga Blue Streaks warm up the crowd after charging onto the field. (T. Charnik and J. Nightingale)