“The Lost Boy,” The Tale of a Boy Finally Found

My personal favorite straight play Saratoga Springs High School has put on, The Lost Boy made me walk out of the theater with my mind simultaneously racing and empty. The emotional story of J.M. Barrie’s childhood constantly shadowing him brought me to tears prior to intermission, with senior Alyce Sinnott as Margaret Oglivy Barrie delivering the heartbreaking line, “The wrong son died.”

The play opened with J.M. Barrie recounting the story of his brother’s death at the young age of 13, which James’ mother never fails to blame him for. The creation of Peter Pan followed 37 years later, as a method for James to “escape” from the world. The Peter Pan image represented Barrie’s deceased brother, Davey, played by junior Jackson Cherry.

Cherry said the origin of Peter Pan was due to the events experienced in Barrie’s own life, his tragic childhood filled with the memory of Davey along with the need to revive his brother for his mother’s comfort.

Sophomore Kai Farr, who perfected the role of J.M. Barrie, said he tried to portray that Barrie’s Peter Pan character was a combination of his brother being stuck at a young age and was the boy who never grew up, but also gave Barrie himself a way to express his childhood past.

Post-show, my eyes were beet red from the sheer magnitude of thought-provoking and heart-wrenching performances. After congratulating the cast and director Bob Berenis, senior Margo Moran said my “response to this show made all the work [they] put into it so worth it.”

However depressing the show was, the happy moments shone through the clouds and provided tearful laughs. Between Moran as the sarcastic fairy Tinkerbell, senior Drew Bennett as Pan’s father-figure the Old Crow, and foreign accents at a caliber one would expect from American teenagers, the cast allowed the audience to enjoy themselves through the twists and turns of Barrie’s life. “The play explains the parallels between J.M.’s life and the elements of the story [Peter Pan] that came from his real life,” said Farr.

The stellar performance weekend seems fitting, as half the cast is set to graduate in 2019. Seniors Sinnott, Moran, Bennett, Maggie Farr, Sean Corbett, and Grace Alberti are all SSHS Drama Club veterans; the Rod wishes them well in all of their future theater adventures, including but not limited to the spring musical How to Succeed in Business Without Really Trying, to be debuted in March 2019. 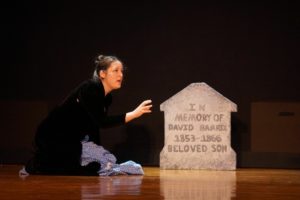 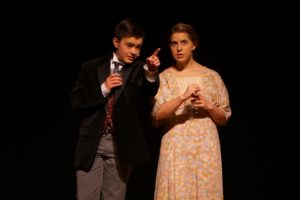 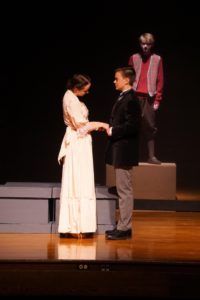