By Isabelle Kelly and Julian Silva-Forbes

The Saratoga Springs Boys Varsity Basketball team tipped off their 2021 season in a near-empty gym last Friday, wearing masks throughout the game. The Blue Streaks held off the Burnt Hills-Ballston Lake Spartans to begin the season with a 64-54 victory.

“It was great being back out there. I missed it all winter, but it was a nice surprise that we had a season here,” said Saratoga senior Christian Dufort, responding to Kyle Adams of The Saratogian. “We came out here ready to play.”

Dufort, who was eight-of-eight from the free–throw line, linked up with teammate Luke Britton all night. The pair of seniors combined for 41 points—Britton scored 21, while Dufort added 20.

“My teammates just give me the ball when I’m open,” said Britton. “I’ve always been a natural shooter, [and] playing with kids that are unselfish … Really just makes it easy to score.” 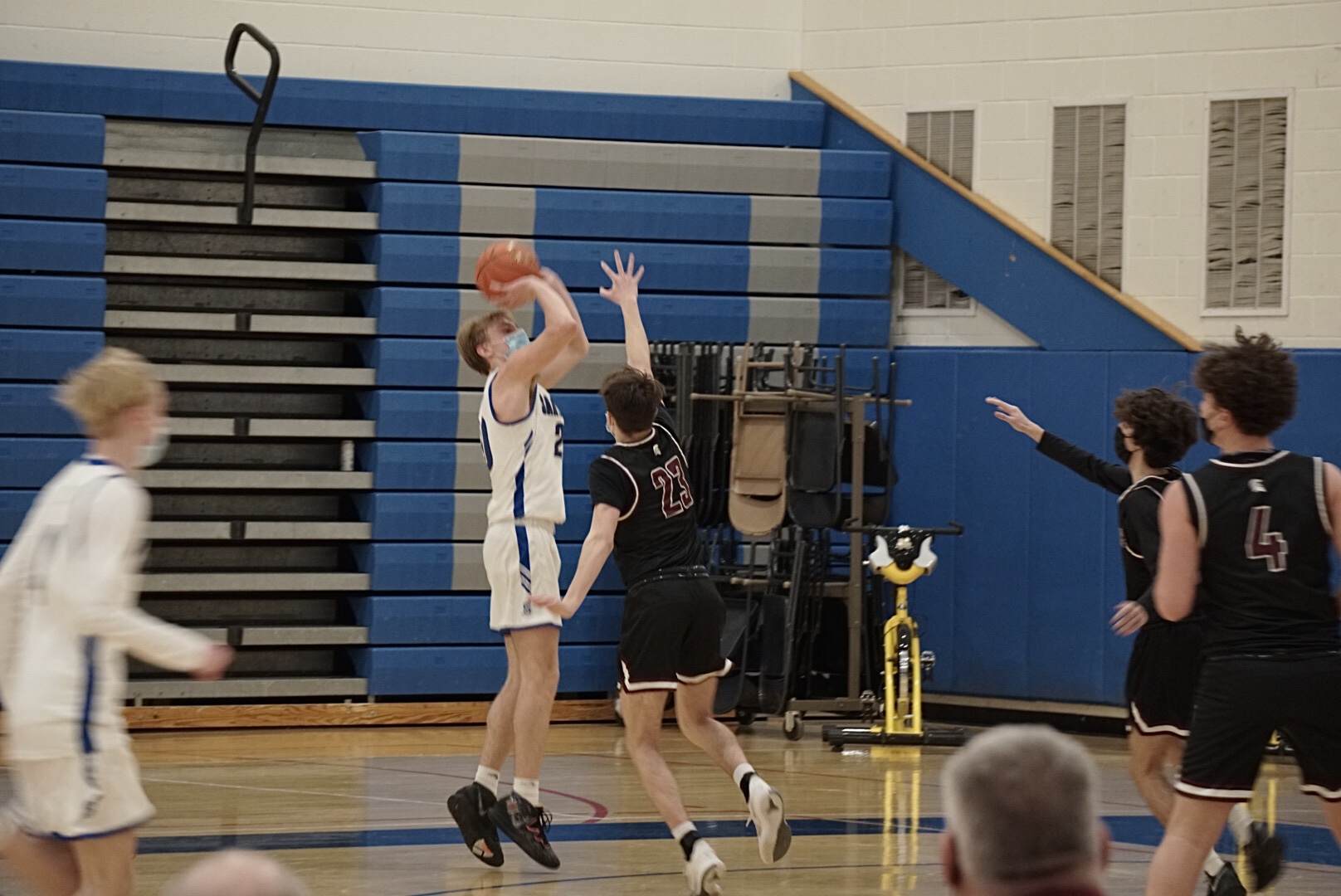 The Blue Streaks came out strong, starting the game with 9 unanswered points and consistent offensive rebounding. Saratoga pressed the Spartans from the moment they inbounded the ball, forcing many sloppy turnovers.

The Spartans’ head coach Kevin Himmelwright, a former assistant coach at Saratoga, voiced his frustration with the referees over the Blue Streaks’ physical defense. Himmelwright said, “Let’s agree to disagree” after receiving a warning from the referee.

The game’s momentum shifted in the second quarter. Saratoga committed several fouls and struggled in transition, as Burnt Hills outscored the Blue Streaks 16-13. Senior AJ Giaquinto led the Spartans run with several physical drives to the rim, en route to a team–high 22 points.

Saratoga put their second–quarter slump behind them to create quick production in the third. Britton scored the first points of the second half off a corner three. On the next play, Dufort dished the ball to Britton from across the court to add another two points.

“[Coach] said that you don’t have to make the assisting pass every single time – I think that really resonated with us. We just trusted pushing the ball ahead and then finding a good pass off of that, instead of having to make the big play,” said Dufort. 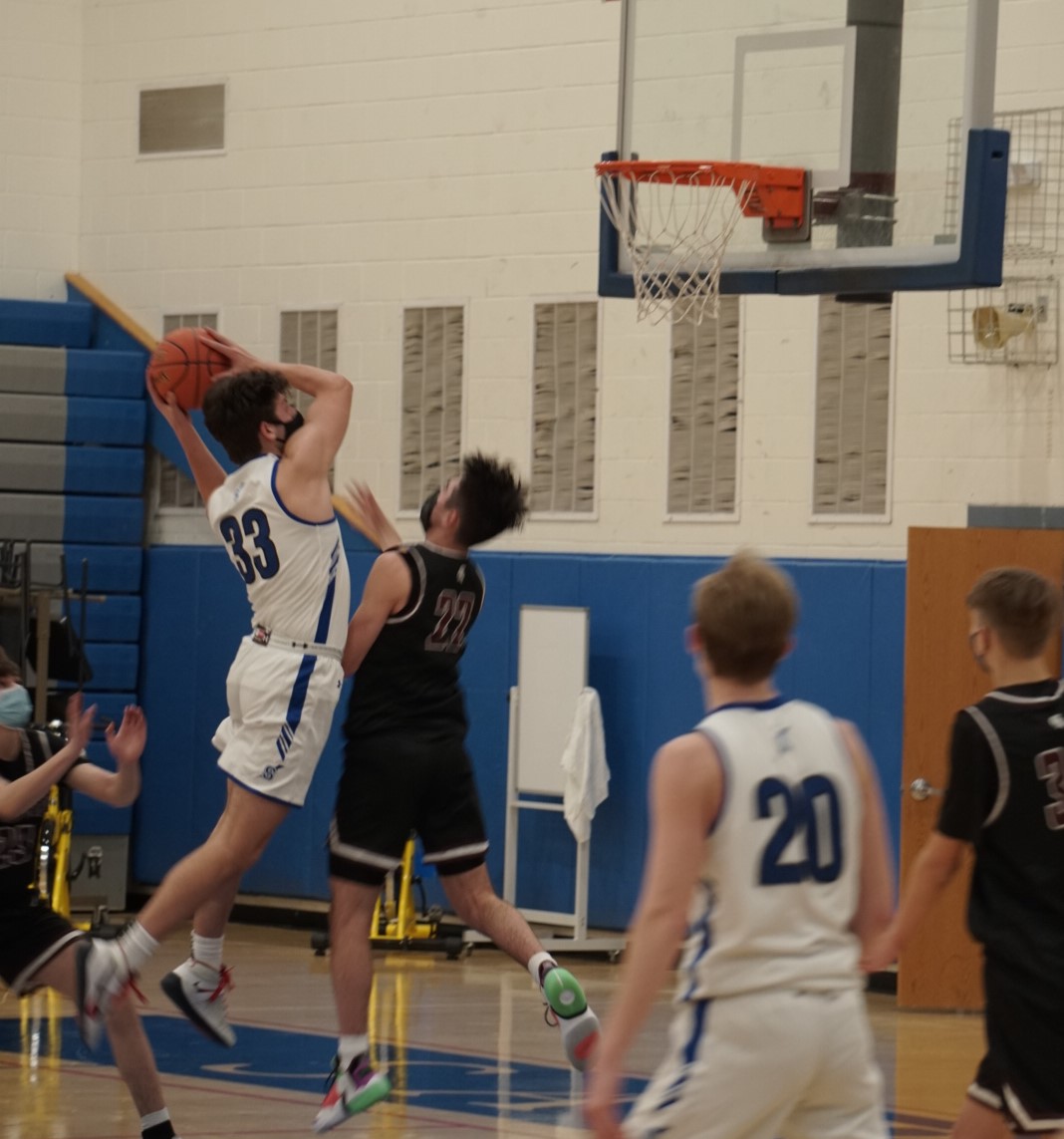 Though the Spartans were more aggressive on offense in the second half, the Blue Streaks’ stingy defense limited Burnt Hills’ production. Sophomore Alex Doin scored five times from three-point range, becoming one of only two Spartans to reach double–digit scoring.

In the fourth quarter, the Spartans rallied back with eighteen points, cutting Saratoga’s lead to ten. Saratoga senior Kaleb Lewis responded with a score on an athletic drive to the basket, ending the game with 14 points.  The Spartans’ late surge was not enough to defeat the hosting Blue Streaks, who were faster and tougher over the four quarters. 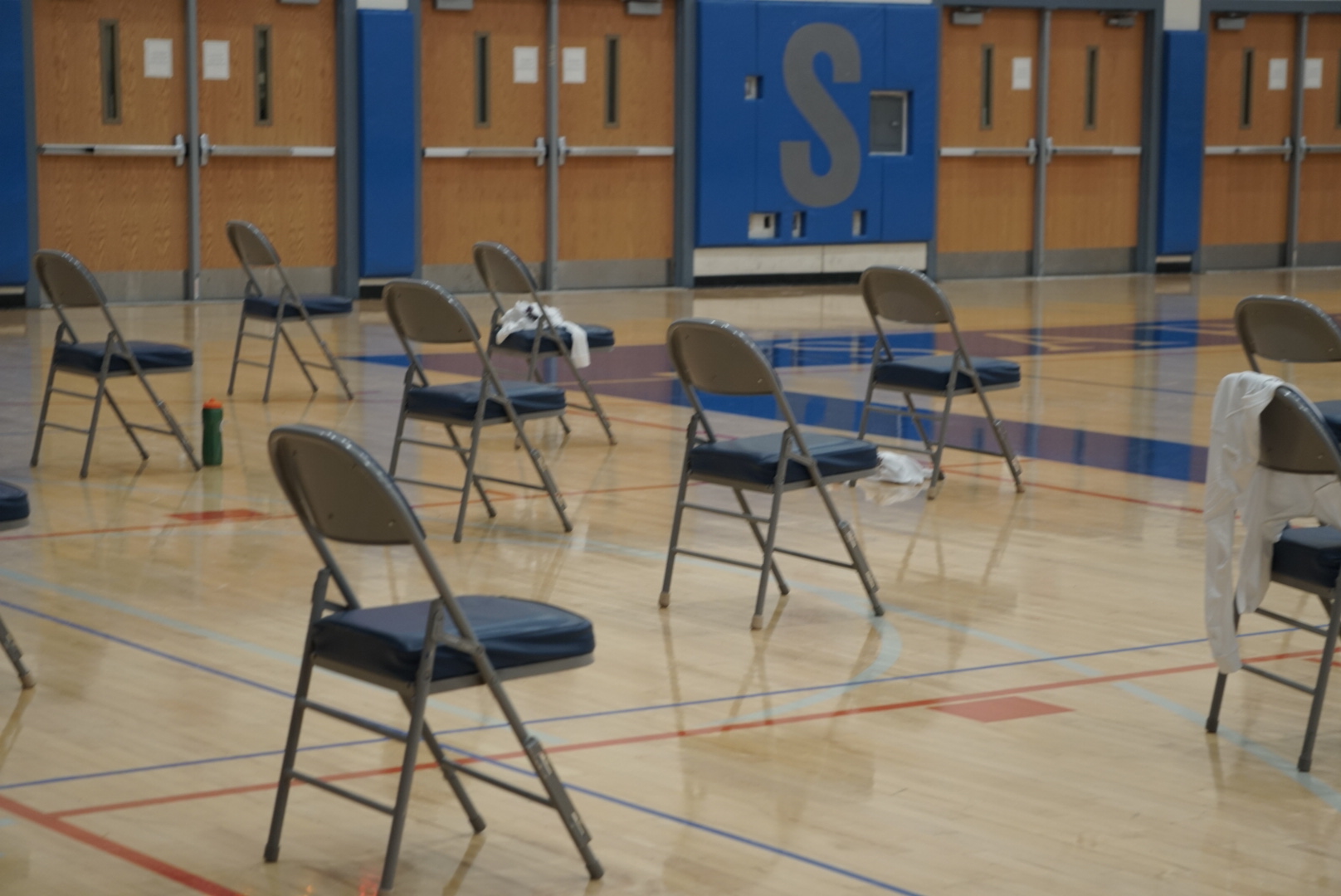 Saratoga’s bench is arranged into socially distanced seats ahead of their February 12th game against Burnt Hills.

The Blue Streaks will continue their season on February 16th with an away game against the Shenendehowa Plainsmen.