Mr. Rhodes: An Example of Service for Young Republicans

Mr. Rhodes puts down his magnifying glass, turns in his lab coat, and switches over to the political side of the Saratoga Springs High School. He waits for his forensic science students to leave his lab and opens his doors to the members of the Teenage Republican Club. 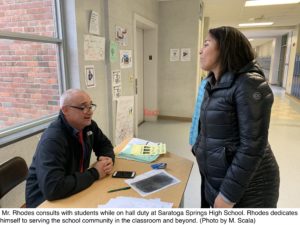 Mr. Rhodes has no background in politics. His political views are based on a core set of values he set for himself.

“You need to have a core set of beliefs that you believe in. Your beliefs should not change if Donald Trump is in office. You should still believe in your core values,” said Rhodes. Accordingly, Mr. Rhodes hopes that club members, and youth in general not be followers, but leaders. Mr. Rhodes’ political views may be more conservative than liberal but Rhodes said, “I believe that your political beliefs should be your view on taxes, economic growth. Policies about that make me somewhat conservative in my beliefs,” said Rhodes.

Members in the club share the same views as Mr. Rhodes, making him a strong advisor for the club. “I believe Mr. Rhodes and I have similar views and think he works well as the club advisor,” said member Trevor Brantigon. The club members look at Mr. Rhodes as more than just the advisor. Not only do they agree with his views, but they admire his character.

“Mr. Rhodes is my favorite teacher, he is very honest and does not sugar coat anything, and I admire the man honestly,” said Mark Verra, the President of Teenage Republicans. Verra never had Mr. Rhodes for Forensics, which might be strange for any other Saratoga student but not for Verra, who initiates relationships with an array of SSHS teachers. “I have learned a lot from him, and I can’t pick out one thing, because he has taught me so many lessons. Not just in politics, but in life in general,” added Verra.

Mr. Rhodes believes his part in the club should not be that significant. “I am very hands off,” said Rhodes. “I don’t want to run the club because that is not what a club should be. It should be an opportunity for the kids to practice real life skills like how to run an organization, learning how to be leaders, to document things, and learning how to plan,” said Rhodes.

Politics is not the focus of the club for Mr. Rhodes.

Instead, he seeks to foster life skills in students as they serve their community through experiences the club provides. The name the Teenage Republican Club would suggest that the club is politics driven with a heavy following of the Republican Party. Mr. Rhodes cleared the assumptions and gave the real purpose of the club. “We don’t really sit around and talk politics,” Rhodes said, “I am much more interested to see the kids learn to do service projects and give back to the community.” During club meetings the students set up community service activities for other students in the school.

For as long as  Mr. Rhodes is the adviser of the Teenage Republican Club, news of the Republican Party will take a back seat to involvement in the community. Rhodes said, “I would describe it as a community service organization, period.”