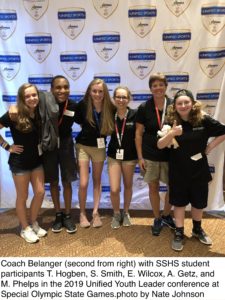 Smack! A student slapped the ball over the volleyball net. Cheers emerged from her team

as she scored a point. This is a common scene in the Unified PE program where students

The class is built on encouragement and acceptance of all students no matter the athletic ability.

Coach Belanger, the Unified PE teacher, is a strong advocate for inclusion of students with and

without intellectual and developmental disabilities.

needed an adult. So, I kind of lucked into it” Belanger said.

through her Unified PE class. “We create an environment where anyone can participate and feel comfortable and welcome

and get involved in any activity” Belanger said. She believes that school environments should be

welcoming of everyone and provide equal opportunities for all students, no matter if they have a

York, describes Coach Belanger as an excellent proponent for inclusion. “I am always amazed

that so many people get this thing and want to leverage it for the greatest good, I think that

Coach B. is one of the greatest examples of that. She intuitively and inherently understands the

had been in an Adaptive PE class before he joined Unified PE. “(An inclusive PE class made

him feel) awesome, I’m so glad I am back in it. I have been wanting this for a long time,” Perella said.

Nicole LaFarr, a student enrolled in Unified PE described the class as a more fun class

than their PE 9/10 class. LaFarr described Coach Belanger as a positive influence on students.

“She includes everyone and is so positive,” LaFarr said.

In June of 2018, Coach Belanger traveled with SSHS students, Tiffany Weiler and Trinity Hogben, to

Seattle for the Special Olympics USA Games. “I will admit I was truly impressed with the athletes I met and watched compete”

Belanger said, “They have the same amount or even more drive than any athlete I have coached.  They love what they do and want

to be the best at it, no excuses.” The experience at the USA games truly opened Belanger’s eyes to the importance of Special

Olympics. “Special Olympics is an incredibly organization that I wish I had known more about prior to my experience with

Unified sports and attending the USA games.  I am so ‘addicted’ to what they do and wish I could be involved in so much more,” Belanger said.

Coach Belanger believes that Unified PE will have lasting effects on students. “The more

we create a (inclusive) school environment and people learn it and live it, they carry it on to

« Mr. Rhodes: An Example of Service for Young Republicans
Mrs. Chudy: Discipline on the Court, Commitment in the Classroom »