Mrs. Chudy: Discipline on the Court, Commitment in the Classroom 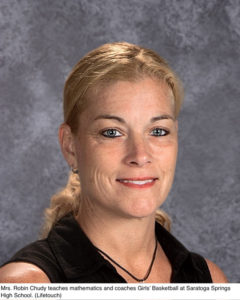 Though she seems a normal teacher to some, her girls are at a pivotal moment not

only for the basketball team, but for Saratoga Springs High School. Her loud voice resonates in

the classroom as she teaches her the trigonometric form of a complex number. With a tall stature,

blonde hair, and piercing blue eyes, she has a commanding, even an intimidating, presence.

Robin Chudy is the Math Department Head, a pre-calculus teacher, and coach of the girl’s

Chudy studied at Union College in Schenectady, and graduated with the class of

in order to play softball as well as basketball, she chose the small, private, liberal arts

Chudy realized that she had a passion for math while at school. She tutored her friends

Now in her seventh year at Saratoga Springs High School, Chudy has been coaching the girls

basketball team all the while, but her coaching career began years before when Chudy started

point, found Chudy’s wing and slipped under it. Since then, Chudy has watched Dolly grow from

a little kid with little experience to a serious and well-trained basketball player.

“She is so disciplined and focused on learning not only the skills of the game, but the art of the

Chudy, assistant coach Christopher DeLorenzo, and the athletes, have noticed the positive

change the team has gone through in recent years. DeLorenzo said, “The team’s gotten more

competitive year after year.” For Cairns, this improvement enlivens the work ethic. “I think it’s

gotten more serious, especially as I’ve gotten older, because all I’ve wanted to do is win

Eve Crossett, a teammate with her eyes on attending West Point expresses a similar sentiment.

“We’re all really talented,” Crossett said, “but this year I feel like it’s a lot different.” Feeling different

makes sense, as the seniors realize that this is their last year and they have the possibility of making

The standards that Chudy sets for the team are high. Players need to be in physical shape.

Players need to put in time outside of practice, and players need the skills to play the game.

they have made. “Last year we broke a record for our school, which was to make it to a

sectional final game, and I’m hoping this year we actually pass that and win sectionals, which

would be amazing,” Chudy said. “We have the talent to do it.”

For Chudy, the best part of her day is when she starts teaching in the classroom. She sees

the value of making connections with kids, both in her class and on the court. As

the same hard work that her athletes go through. Students must be in shape mentally. Students

must put in time outside of class, and students need the skills to do math.

As Chudy said, “Coaching is an extension of teaching, and trying to deliver a message, and

trying to get kids to learn and to improve.”